Article
Step Brothers coming in February on DVD and Blu-ray 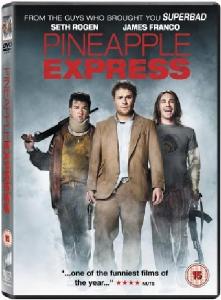 Lazy stoner Dale Denton (ROGAN) and his dealer Saul Silver (FRANCO) end up having the adventure of a lifetime after witnessing a murder by a crooked cop. When they realise that their rare strain of weed called Pineapple Express, left behind at the scene, is so rare that it can be traced back to them, they really do have to run for their lives.

Pineapple Express is available as a single disc release, containing the original UK theatrical cut and commentaries, and a two-disc release, featuring both the original US theatrical cut and an extended version, plus a bonus digital copy of the film. The two-disc release is packed with an incredible 3 hours of unmissable extras, including 15 deleted scenes, 2 blooper reels, 13 featurettes, rehearsal footage and much, much more! The Blu-ray release boasts an additional exclusive game, 'Ride the Express.'