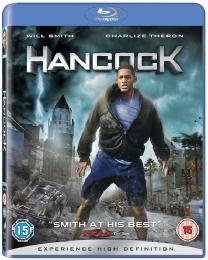 Cover for Hancock on Blu-ray 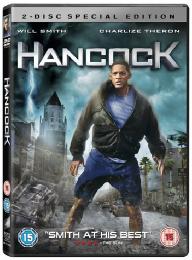 DVD
Legend Of Bagger Vance, The (US)

Article
Seven Poundson DVD and High Def Blu-ray this May

Hancock
Available to buy on Blu-ray, DVD and UMD™ Video / rent on DVD

SMITH stars in this action-packed comedy as Hancock, a sarcastic hard-living and misunderstood superhero who has fallen out of favour with the public. When Hancock grudgingly agrees to an extreme makeover from idealistic publicist Ray Embrey (BATEMAN), his life and reputation rise from the ashes and all seems right again - until he meets a woman (THERON) with similar powers to his and the key to his secret past.

Hancock is available as both a single disc DVD release containing the original UK theatrical version and as a double disc special edition packed with unmissable added value. These extensive bonus materials include five featurettes, which take viewers 'backstage' on Hancock. Included are the behind-the-scenes documentary Superhumans: The Making of Hancock; Seeing the Future takes eight scenes from the actual film footage or B-roll footage and shows side by side comparisons of the conception during the pre-visualization creation; the special effects are highlighted in Building a Better Hero; Bumps and Bruises is a breakdown of action sequences in the film; and director PETER BERG is interviewed for Mere Mortals: Behind the Scenes with 'Dirty Pete.'

The double disc special edition will also include a brand new Extended Cut and the original theatrical version of the film, alongside a bonus digital copy of the movie, which allows consumers to download a digital copy of the film to play on their PC or PSP® (PlayStation® Portable) System, and two additional featurettes. The added featurettes are Home Life, which shows via time lapse photography the building of the homes and buildings used in the film; and Suiting Up, a featurette on the film's costume design.

The bonus features for the Blu-ray High-Def Edition includes all the material from double disc edition plus the BD-Live feature and the additional Blu-ray exclusive featurette On-Set Visual Diary, a bonus-view picture-in-picture track with behind-the-scenes footage and interviews with the cast, filmmakers and crew. The Blu-ray release will also include a bonus digital copy.